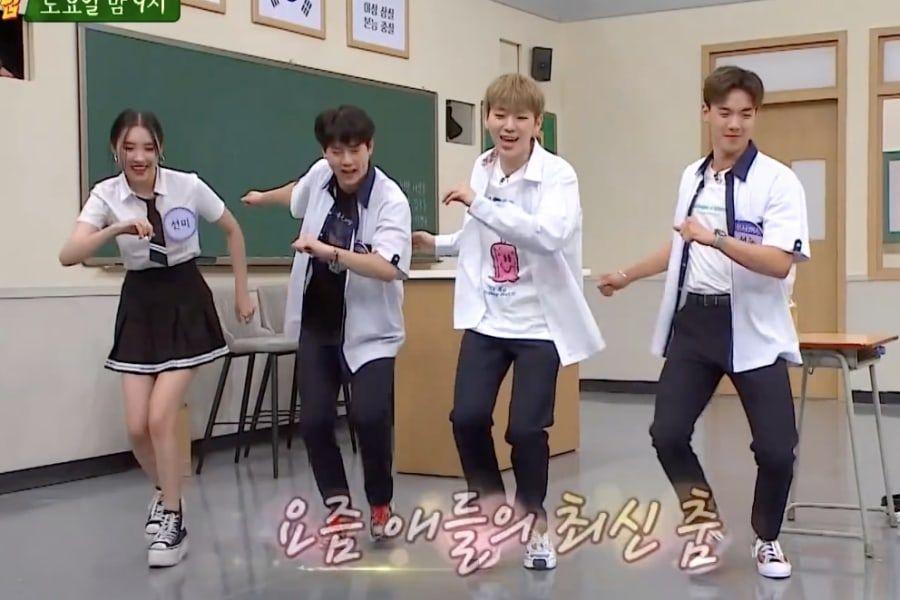 Get ready for an exciting, star-studded episode of “Ask Us Anything”!

On July 4, the MBC variety show released a preview of next week’s episode, which will feature Block B’s Zico, Sunmi, and MONSTA X members Shownu and Joohoney as guests.

The four singers’ strong personalities immediately shine through, as Joohoney energetically introduces himself with a reference to his viral “Clap!” meme from his guest appearance on Mnet’s “Produce X 101.” Meanwhile, Sunmi isn’t afraid to get a little savage: when Lee Soo Geun asks her whether it’s true that she’s not a fan of Zico’s smash hit “Any Song,” she replies candidly with an apologetic smile, “I really dislike it.”

However, that doesn’t stop Sunmi from joining Zico to playfully take on the “Any Song” challenge together—which Min Kyung Hoon also attempts, to the cheers and laughter of his fellow cast members. Zico, Sunmi, Shownu, and Joohoney also show off their dancing skills both together and separately, and Sunmi goes on to perform her new song “pporappippam.”

Finally, when Zico mentions that he typically appears on music-themed variety shows, Super Junior’s Kim Heechul insists, “We’re also a music variety show!” His bandmate Shindong then attempts to prove it with a passionate dance performance that ends in unexpected comedy as he falls on the floor.

Zico, Sunmi, Shownu, and Joohoney’s episode of “Ask Us Anything” will air on July 11 at 9 p.m. KST. In the meantime, check out the new preview below!

Watch a recent episode of “Ask Us Anything” with English subtitles now: