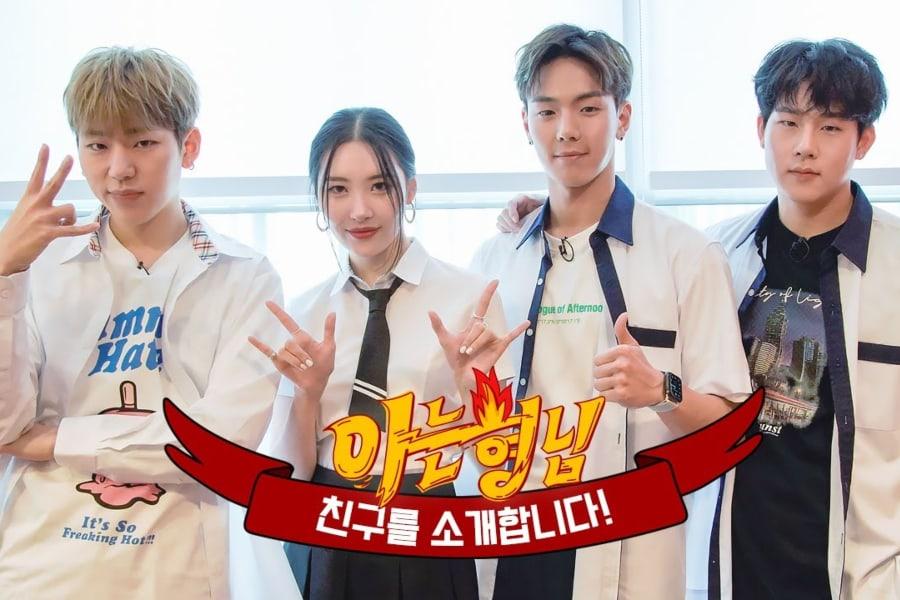 MONSTA X’s Shownu and Joohoney, Sunmi, and Zico have given a sneak peek of their chemistry in a new behind-the-scenes clip!

Before the upcoming broadcast of their “Ask Us Anything” episode, the four idols gathered together for a self-interview. After introducing themselves, they talk about how it feels to appear on the show. Sunmi says, “It’s my second time here, and I hope I appear more than before. Last time I came with Jang Yoon Joo, and I have a fear of variety shows, so I didn’t really appear a lot.” Joohoney, who is guesting on the show for the first time, adds, “I’ll make sure to liven up the atmosphere of this school.”

Zico asks Shownu if he prepared anything special for this episode, and Shownu replies, “I prepared a couple dance with Joohoney.” Sunmi declares she and Zico also prepared a performance together. Zico asks if Shownu is confident they’ll defeat them, and Shownu nods eagerly.

The four idols also talk about their latest comebacks. Zico shares that his song “Summer Hate” featuring Rain is a refreshing one to listen to this summer, while Sunmi asks for fans to support her song “pporappippam.”

Joohoney doesn’t forget to mention their most recent title track and says, “We finished our promotions for ‘FANTASIA,’ and we’ll do our best to give Monbebe [fandom name] good content.” Shownu reminds their fans about their upcoming concert, but when Zico asks about the date, Shownu vaguely replies, “It’s sometime in July,” making Sunmi and Zico burst into laughter.

Watch the behind-the-scene clip below!

Zico, Sunmi, Shownu, and Joohoney’s episode of “Ask Us Anything” will air on July 11 at 9 p.m. KST. In the meantime, check out the preview here!

Also, you can watch “Ask Us Anything” with English subtitles here: