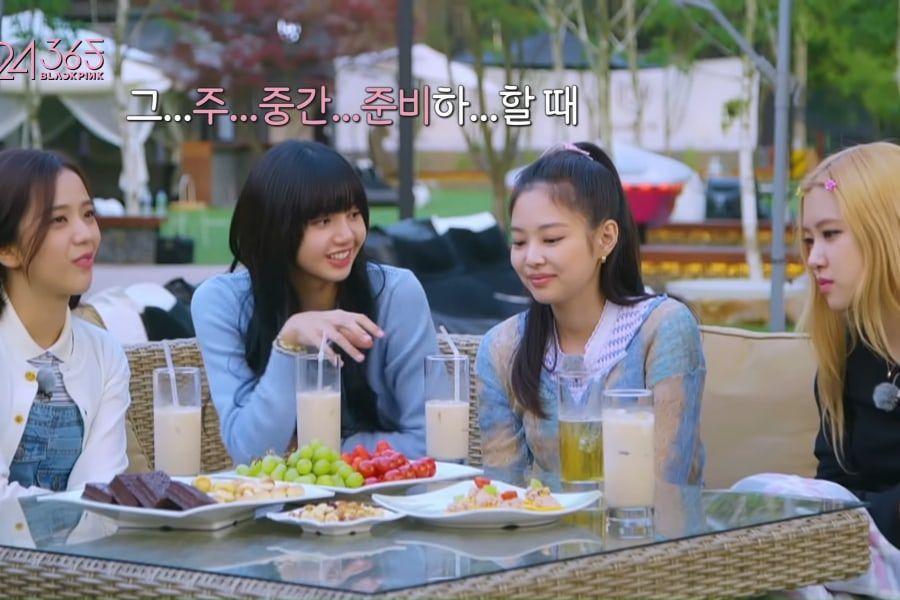 BLACKPINK reminisced their past days as trainees on the fifth episode of their YouTube show “24/365 with BLACKPINK.”

Over cocktails and snacks, the group talked about their trainee days. Rosé shared they didn’t order a lot of delivery food like chicken when they were trainees, and Jennie said the food she remembers eating the most is scrambled eggs and strawberry jam. Rosé added they also had dumplings and oriental dressing and asked, “What kind of combination was that?” Lisa wondered why they enjoyed eating them so much, and Jennie explained, “Back then, we didn’t have money to get delivery food every day. So when we went grocery shopping once a month, we would always buy strawberry jam and eggs.”

The girls also talked about the horrors of living with cockroaches and centipedes. Jennie pointed out that Lisa was the bravest when it came to dealing with bugs, and Jisoo said, “We would be behind her and cheering her on, and then [holding up the bug she caught], she would ask, ‘What do I do next?'”

Then they discussed the hardships of dorm life. Jisoo admitted she kind of regretted moving into the dorm back then because life had been really tough. Rosé shared she didn’t even know she would be separated from her parents so quickly. She remember being in shock when her parents said good-bye to her and cried in the dorm alone afterwards. The other members confessed they cried as well, and Jennie said, “We bonded the most during those tough times.”

Rosé admitted, “I never danced before I became a trainee. Jennie taught me the basic moves first, but I was like, ‘What on earth am I doing right now?'” Jennie added, “She kept saying it was her first time doing something like this.” Rosé said, “I had a mental breakdown because we had to do that for months. But I started to want to dance well after seeing Lisa. She was really good at dancing, and I thought I wanted to be like her.”

A staff member asked if they sang other artists’ songs when they were trainees. Jennie replied, “Of course. We sang more than a hundred songs,” and Jisoo added, “We didn’t have our own songs back then.” Then Rosé played the guitar as they sang covers of Jessie J’s “Price Tag,” 2NE1’s “Lonely,” and Park Bom’s “You and I.”

Watch the full video with English subtitles below:

BLACKPINK Rises To Become The Second Most Subscribed Artist On YouTube