Gaon Chart has revealed its chart rankings for the week of October 6 to 12!

ATEEZ topped this week’s physical album chart with their first studio album “TREASURE EP.FIN : All To Action,” which made its debut at No. 1. AB6IX’s first studio album “6IXENSE” debuted at No. 2, while BTS’s 2017 mini album “Love Yourself: Her” shot back up the chart to claim No. 3 for the week. MAMAMOO’s Wheein’s second solo release “soar” debuted at No. 4 on the chart, with Shinhwa’s Shin Hye Sung’s “Setlist” rounding out the top five. 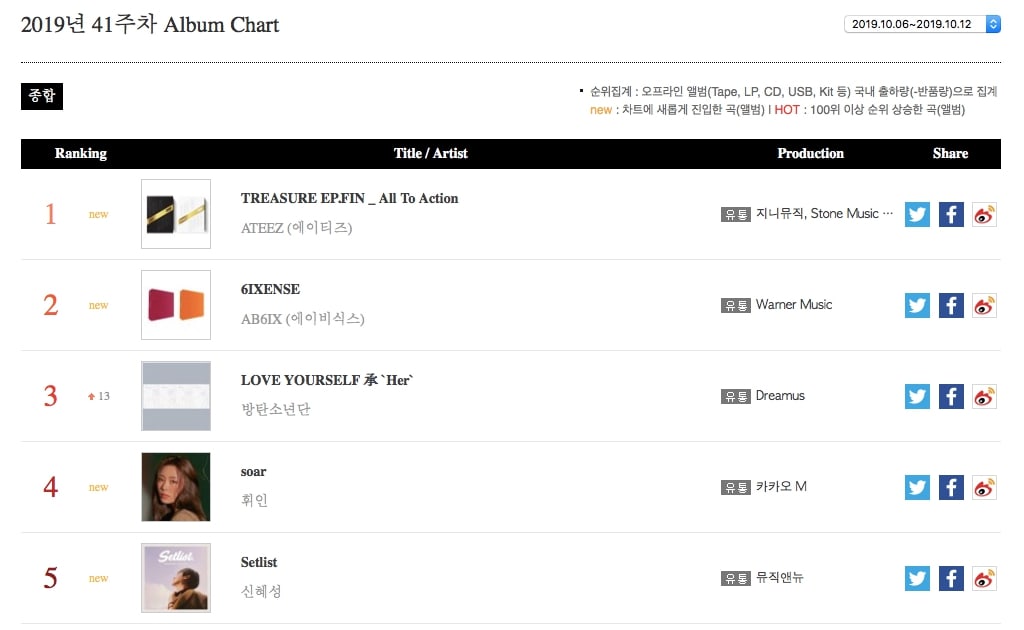 AKMU’s “How Can I Love the Heartbreak, You’re the One I Love” continued to top the overall digital chart for the second consecutive week, and Jang Beom June’s “Your Shampoo Scent in the Flowers” (from the OST of JTBC’s “Melo Is My Nature“) similarly maintained its position at No. 2. Paul Kim’s new song “Empty” debuted at No. 3 on this week’s chart, followed by Lim Jae Hyun’s “I’m a Little Drunk” at No. 4 and BOL4’s “Workaholic” at No. 5. 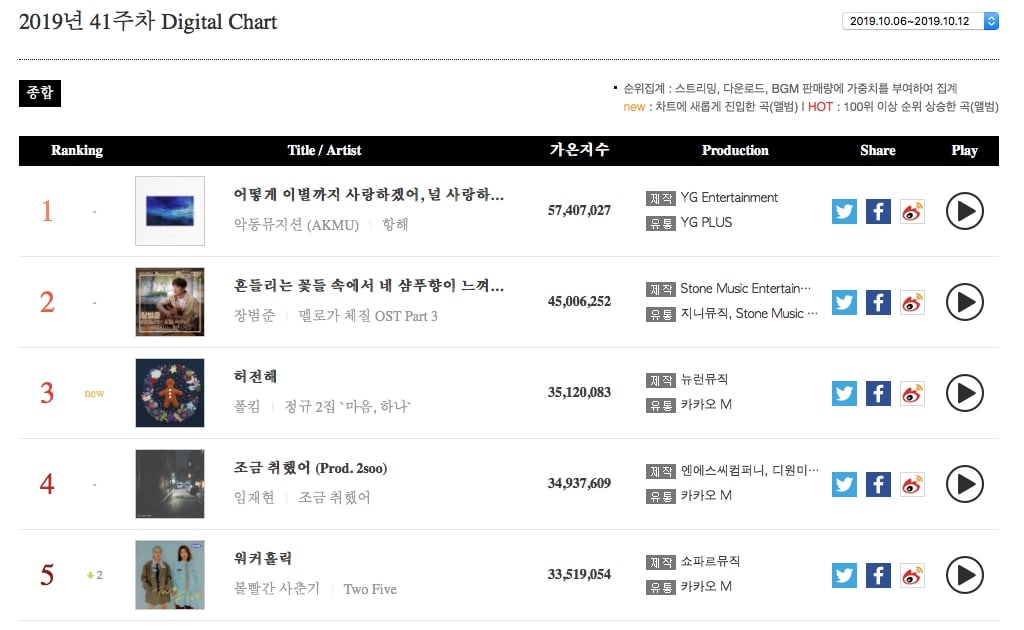 Paul Kim’s “Empty” debuted at No. 1 on this week’s digital download chart, with AB6IX’s new title track “Blind for Love” debuting at No. 2. AKMU’s “How Can I Love the Heartbreak, You’re the One I Love” charted at No. 3, Jang Beom June’s “Your Shampoo Scent in the Flowers” at No. 4, and Jang Deok Cheol’s “See You Later” at No. 5. 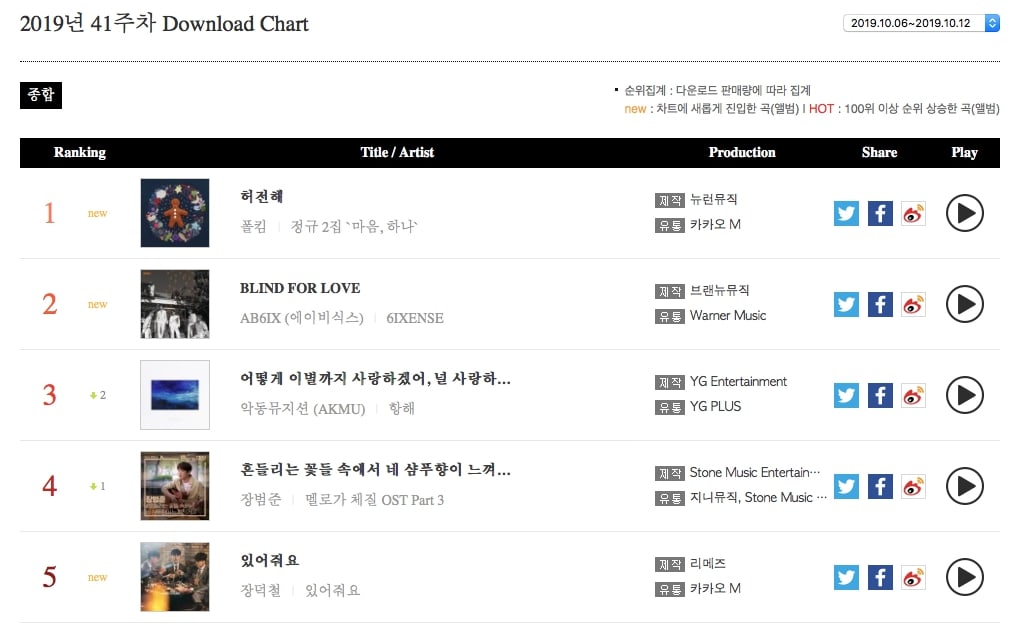 AKMU’s “How Can I Love the Heartbreak, You’re the One I Love” and Jang Beom June’s “Your Shampoo Scent in the Flowers” both held onto their spots at No. 1 and No. 2 respectively on this week’s streaming chart. Lim Jae Hyun’s “I’m a Little Drunk” rose to No. 3, trailed by BOL4’s “Workaholic” at No. 4 and Paul Kim’s “So Long” (from the OST of tvN’s “Hotel Del Luna“) at No. 5. 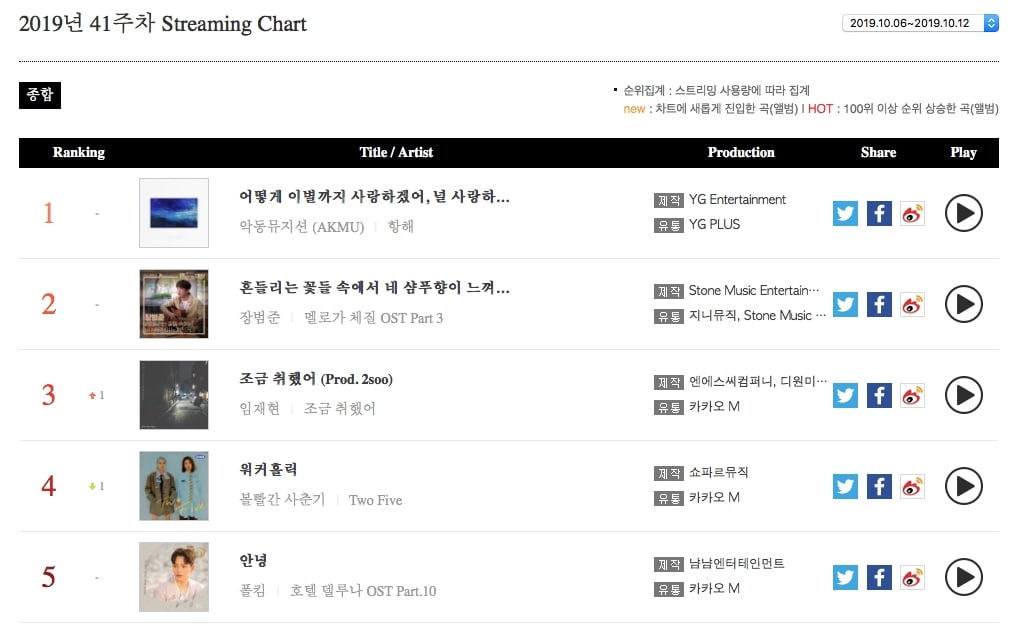 BTS continued their reign over Gaon’s new “Social Chart 2.0” for the 15th consecutive week, while TWICE successfully defended their position at No. 2. Band Hoppipolla came in at No. 3, while H.O.T.’s Jang Woo Hyuk and Stray Kids shot up in the rankings to No. 4 and No. 5 respectively. 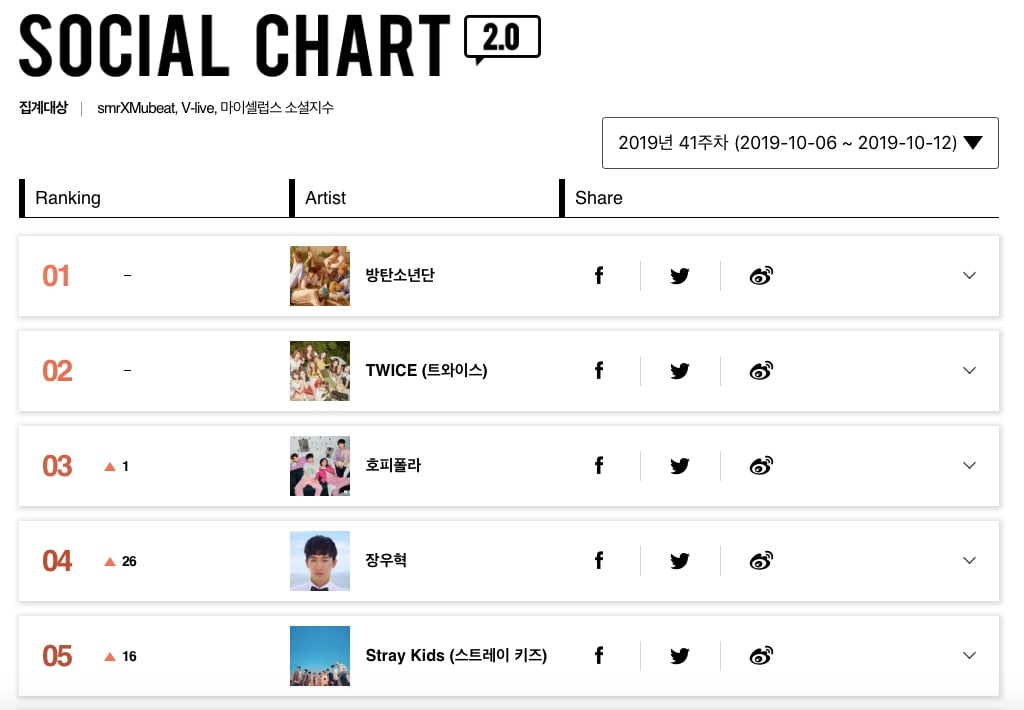